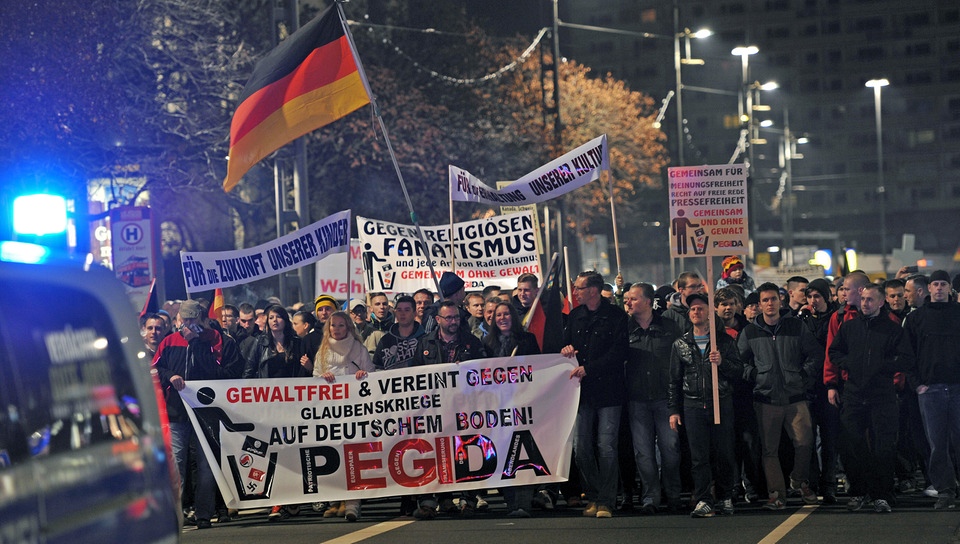 It has been a story that has crept up on most observers over the Autumn, until it dominated Germany's news agenda by the beginning of December. With only a few hundred participants in early October, within two months the Pegida's (Patriotische Europäer Gegen die Islamisierung des Abendlandes) protests every Monday against a putative Islamisation of the Occident had attracted over fifteen thousand participants. While attempts to get similar protests under the same brand started in other parts of Germany have faltered, the momentum these islamophobic Pegida protests have built in Dresden have caused consternation in Germany. Suddenly, Dresden has seen an influx of German and international journalists trying to make sense of events.

One of the problems hampering this reporting about the Pegida protests is a tendency to equate it with distant historical events such as the rise of National Socialism. Yet in the case of Pegida, reading a little less about the 1930s and a little more about the 1990s could help develop a better understanding of why the movement has done well in Dresden and stuttered elsewhere in Germany. In the aftermath of unification the swift economic collapse of GDR industry hit Dresden and many other parts of Saxony particularly hard. Mass unemployment by 1991 led to swift disillusion with the promises made by West German political elites that reunification would lead to prosperity. The collapse of the GDR's border service coupled with war and political transformation in Eastern Europe also led to a massive influx of migrants, pushing public services across Germany already struggling to cope with reunification to the limit. This traumatic experience fostered a fundamental distrust of the German political elite among many East Germans. While in other parts of the former GDR such discontent led to a revival of the old East German SED, now in the guise of the Linkspartei as well as various other Green, left-wing or conservative movements, parts of Saxony quickly became strongholds of the radical right.

The emergence in Saxony of extensive right-wing extremist networks was part of a nationwide surge between 1991 and 1994 during which neo-Nazi skinhead gangs became a public order problem in both East and West German cities. Yet even in other major cities in the East, including Saxony's Leipzig, these gangs were often confronted with equally strong left-wing, migrant and pro-democracy conservative youth milieus that were more than willing to fight back in order to reclaim control of the streets. As a half-British/half-Ukrainian teenager growing up in Hannover, I witnessed first hand how such neo-Nazi skinhead groups were often fought and contained by all levels of society, ensuring they lost momentum and members by the mid-1990s. Yet in Dresden left-wing networks that proved so crucial in countering the radical right in Leipzig remained politically marginalised. Rather, the nationwide prominence of the left-alternative scene in Leipzig's Connewitz and Plagwitz neighbourhoods drew in young Dresdeners who would otherwise have made up the core of anti-Fascist activism in their home city.

In a similar fashion, most migrants who were part of the 1990s immigration wave quickly moved out of Dresden to other cities in Germany because of an atmosphere of intimidation. Vietnamese and some Turkish Alevi groups, the only two immigrant communities that remained in Dresden in any number, held on because they organised themselves in a way that deterred direct attacks. But these migrant milieus were not in a position to exert political influence. Conservative Christian movements that helped integrate migrants into the German centre-right also found it difficult to exert influence in Dresden, which had low church attendance rates in the 1990s. As a consequence, while neo-Nazi youth gangs saw a major decline in Dresden as the economic situation stabilised by the early 2000s, many social attitudes that had enabled their rise had not been challenged by regional political elites.

It is therefore no surprise that Dresden has been particularly fertile ground for the emergence of such a protest movement. In the past decade Dresden has become a regular place of radical right protests commemorating those who died when the British Royal Air Force bombed the city in 1944. In a region which still grapples with social deprivation, there is a large section of the populace that feels abandoned by national and regional political elites. Though there has been an upswing in growth, the potential emergence of another wave of mass migration in the last two years coupled with the continuing pressures the Hartz IV social welfare reforms exert on the more economically vulnerable portions of the workforce have built up these local anxieties. With the emergence of the right-wing populist AfD marking a threat to its political dominance, the governing CDU has been reluctant to firmly criticise those who participate in Pegida because of concerns that it may lose conservative voters to this upstart challenger. As a member of Saxony's Sorbian Slavic minority, the region's Ministerpräsident (Prime Minister) Stanislaw Tillich is also under pressure to demonstrate that he understands the concerns of more conservative and nationally-oriented CDU voters, many of which remain suspicious of Sorb minority rights.

Unlike Leipzig and other cities across East and West Germany, immigrant communities or left-wing and church-based political networks, that in themselves have a growing immigrant membership, were slow to challenge Pegida's momentum and demonstrate that those opposed to the radical right control the streets. By contrast, in cities where church organisations, the anti-Fascist left and members of immigrant communities are numerically strong, those organising Pegida  demonstrations have been vastly outnumbered by counter-demonstrators who want to prevent a shift towards the radical right. As a political space, Dresden therefore has its own unique dynamic with its own underlying pressures and conflicts. The success of Pegida there may mark more of a local extreme right-wing bid to gain dominance in the region rather than any movement with truly nationwide ambitions. In the 1990s, one of the core strategic aims of radical right-wing networks in Saxony was the establishment of 'nationally liberated zones' (National befreite Zonen) in which they exerted de facto control undercutting state authority. Pegida's 'shadow Republic' whose leaders challenge the legitimacy of political elites, state authority and the media could perhaps be seen as an updated variant of this strategy.

Yet in the last several days momentum seems to be shifting against the organizers of the Pegida movement. In the wake of the Charlie Hebdo murders in France, on 10 January, the CDU together with church, left-wing and migrant organisations were finally able to organise a counter-demonstration that outnumbered even the largest Pegida marches. The participation of senior CDU politicians, including Stanislaw Tillich, is of great significance and may point to a clear swing of conservative Saxon opinion against Pegida.

Just as in the 1990s conservative milieus in Saxony only clearly turned against the radical right when disorder began to damage the Bundesland's national and European reputation, so such regional pride may begin to increase willingness among many conservative Saxons to distance themselves from Pegida. The ferocious mockery of Pegida across Germany may bring about a dynamic where, as in the 1990s, regional embarrassment rather than a deep commitment to minority rights leads many Saxon conservatives to turn against extremists and populists and return to the comforting embrace of the CDU.