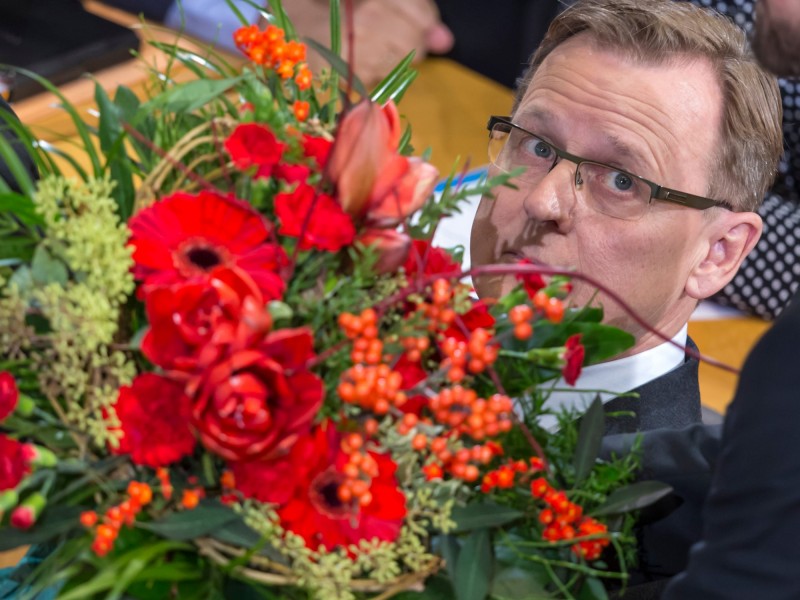 Standing outside Thüringen's Landtag in Erfurt ten days ago, several hundred protesters decried what they saw as an imminent threat to German democracy. Made up of victims of the Stasi, Christian Democrats as well as a few supporters of the populist AfD and radical right wing movements, this demonstration represented a final attempt to halt the election of the Linkspartei's first Ministerpräsident (regional prime minister) by those who have not forgiven it for the crimes of its SED predecessor, the state party that once ruled the GDR. To some these fears may seem extreme, since the more toxic aspects of the SED's legacy were quietly acknowledged as the party transformed itself into the PDS in the 1990s and then merged with various West German radical left wing splinter groups to create the Linkspartei over a decade ago. Yet reluctance among its leaders to challenge GDR apologism as well as the doctrinaire dogmatism of the party's Communist wing, has fuelled concern among many Germans that Bodo Ramelow's election as a Ministerpräsident could mark the start of a process whereby a party with still suspect democratic credentials could take power on the federal level.
If one steps back a bit and looks at the wider context, however, there are signs that in the short to medium term these concerns are overstated. In the past decade the Linkspartei has repeatedly acted as a junior partner within SPD coalitions in East German Bundesländer and has rarely disrupted established social and economic policy. With the SPD experiencing drastic losses since the introduction of Hartz IV reforms in 2005, the likelihood the Linkspartei could become the senior partner in a coalition with the SPD and the Greens (the Red-Red-Green option) has increased with every electoral cycle. Yet at the moment the ability to realise such a coalition in practice very much depends on the specific regional context in which politicians on the Bundesland level are operating.
Under Bodo Ramelow's leadership the Linkspartei's rise to the status of second main party after the CDU in Thüringen has been impressive. But it is unlikely that the specific conditions of his success will be swiftly recreated elsewhere in Germany. As a church-going moderate who gets along with the local business community, in Thüringen Bodo Ramelow has largely defused the Linkspartei's reputation for radicalism, pushing more embarrassing Stasi apologists and committed Communists to the fringes of the local party. This strategy helped the Linkspartei in Thüringen deflect CDU rhetoric in September’s regional election designed to stoke fears that a coalition under Ramelow’s leadership would undermine the economic stability of the region and empower radicals with a revisionist attitude towards the GDR's legacy.
Yet an ideological move to the centre is deeply opposed by more radical factions of the party whose bastions lie in the Western Bundesländer. Ramelow’s willingness to acknowledge that the GDR was an ‘Unrechtstaat’ (literally an ‘unjust state’, i.e. a state without an impartial system of justice) in a joint document with his new SPD and Green coalition partners is also quite controversial among parts of the Linkspartei in Eastern Bundesländer who remain unwilling to reject the legacy of the East German state. While Ramelow’s reformist model is influencing thinking among key Linkspartei circles in Sachsen, Brandenburg and Berlin, the level of resistance such initiatives are still encountering at all levels of the party indicate that the Linkspartei has a long way to go before it can assuage concerns among its potential Social Democrat and Green partners that it can be a stable partner in a coalition government in the Bundestag.


The current crisis over the Kremlin’s intervention in Ukraine has accentuated such worries among the Greens in particular, many of which are infuriated with the tendency among Linkspartei politicians to downplay the destabilizing impact of Russian aggression and belittle the political interests of the Ukrainian people. Splits over the Ukrainian crisis between effectively pro-Russian legislators such as Sahra Wagenknecht or Sevim Dagdelen and senior party figures such as Stefan Liebich who acknowledge Ukrainian sovereignty, have become intertwined with internal party battles over domestic policy as well. As a result of these vitriolic debates within the Linkspartei, many Social Democrats and Greens are still unconvinced that it would be able to act as an effective party of national government. Without any clear resolution to the Ukrainian crisis which could help the SPD, Greens and Linkspartei put foreign policy divisions to one side, it is highly unlikely that even a successful Red-Red-Green coalition under Ramelow could provide the basis for a similar arrangement under SPD leadership on the national level.

And that is assuming that the Red-Red-Green coalition in Thüringen is a success. With a wafer thin majority of one seat in the Landtag, Ramelow’s government will be constantly vulnerable to blackmail from disenchanted backbenchers in all three parties. Already in the run up to the initial vote for the coalition in the Landtag, the SPD had enormous trouble keeping its former regional party chairman on side after he had come under attack from key Thüringen Social Democrats for running a disastrous election campaign. Throughout its legislative term, the Ramelow government will struggle to buy off backbenchers, many of whom harbour a deep dislike of their coalition partners, even when it comes to ensuring minor bills are passed. Such potential coalition infighting would not only disrupt the Red-Red-Green coalition in Erfurt. If a Ramelow government goes down in flames, it also could discredit advocates of such an option at the Bundestag, making a successful bid by SPD chairman Sigmar Gabriel for the Chancellorship in 2017 even less likely than it is now.
Along with internal tensions, a Ramelow government also faces the prospect of constant external attacks by a once dominant Thüringen CDU which believes it has had its rightful place in government stolen by the successors of the SED. Knowing full well that it would take one Landtag member to destabilise the Red-Red-Green project in Thüringen as well as nationally, Mike Mohring, the Thüringen CDU’s ferociously ambitious new leader, will do his utmost to bring defections about. With the right populist AfD now also in Thüringen’s Landtag, Mohring will undoubtedly be in a rush to ensure that the CDU gets back in power before its voter base potentially erodes at a future point when Merkel-fatigue may begin to drag down the party’s ratings.
Parallel to these open challenges within the Landtag, Ramelow also faces bureaucratic guerilla warfare from regional ministries, state agencies and a judiciary that have been stacked with CDU appointees over the past two decades. Already local prosecutors in Erfurt have put in a dubious request that Ramelow has his parliamentary immunity waived because of his participation in unauthorised anti-Nazi protests a few years ago. Though these charges are unlikely to stick, the leadership of all three governing parties in Erfurt now face the constant risk that hostile Christian Democratic loyalists within the state bureaucracy will leak embarrassing information in order to bring down a government they loathe.
Such resistance is unlikely to remain limited to the confines of Thüringen’s state institutions. For one of the most misleading cliches about Germany’s Eastern Bundesländer has always been that the bulk of its population remembers the GDR years with fondness. In fact, just below the surface the legacy of the GDR and the SED political networks that ran it still have a deeply polarising effect on East German society. For all the voters with sunny recollections of job security and social homogeneity, there are just as many in the East for whom the memories of the GDR’s injustices are still traumatic twenty-five years after the fall of the Berlin Wall. These divisions have often been carried over to a new generation that never experienced ‘Real-Existing-Socialism’, with younger East Germans often absorbing their family’s particular historical memory of the Cold War era.
Thus rather than gaining strength through a new coalition option with the Linkspartei, both the SPD and Greens may lose voters with a background in networks opposed to the GDR. Old dissidents may not particularly like the CDU, but many would rather see Angela Merkel in power rather than enable the successor party of their old oppressors to get a foothold in the federal government. With her own East German background, Angela Merkel is very well aware of how uneasy Greens in particular are about Ramelow’s rise in Thüringen. It is therefore no surprise that her recent speech at the CDU party conference hammered the SPD over its cooperation with the Linkspartei, yet expressed regret over her own failed coalition negotiations with the Greens after the 2013 Bundestag elections. Rather than opening up a new pathway to power for a severely weakened SPD, even mild conflicts within the Ramelow government in Erfurt could lead the Green Party leadership to back away from the Linkspartei and remove any further obstacles to a coalition with Merkel’s CDU after the 2017 elections.
If such a scenario gains momentum, Social Democrat strategists in in their plush Willy-Brandt-Haus headquarters may rue the day they ever started preparing the ground for the Red-Red-Green option in Berlin.
Posted by Alex Clarkson at 07:51